Have you been hearing the word ‘bagasse’ lately, and wondering what it’s all about? Bagasse is the hot topic in biodegradable food packaging; a natural, eco-friendly alternative to polystyrene. Expanded polystyrene is a man-made product – a petroleum- based plastic. Bagasse on the other hand is an all-natural plant-based material; the waste fibre that remains after sugarcane has been pressed for its juice to make sugar. While the two materials have a somewhat similar look and feel, they are opposites in every other way. 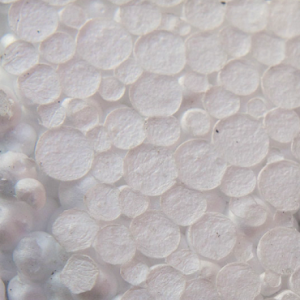 A High Cost to People and Planet

The negative impacts of polystyrene start at manufacturing, and can end hundreds or thousands of years later when it eventually breaks down. During the manufacturing process, workers are regularly exposed to styrene – the liquid version of polystyrene. Styrene is an occupational health hazard and continued exposure can result in a range of negative health effects. Studies also show that styrene can leach out of polystyrene into hot food and drinks. According to the International Agency for Research on Cancer, styrene is a possible human carcinogen. In addition, the production of Styrofoam requires mining, fracking and drilling for fossil fuels… need we say more?

After manufacturing, polystyrene serves its short-lived purpose as food-packaging. Polystyrene can be down-cycled but because it’s so light it’s near impossible to make it worth someone’s while to collect it, so it hardly gets recycled. The polystyrene then mostly ends up in a landfill – though it is unlikely to stay there. It’s 95% air, making it lightweight and buoyant. Because of these characteristics, discarded polystyrene often ends up floating down waterways and into the oceans.

Polystyrene is also porous and, once in the ocean, can absorb a variety of pollutants in the water. To make matters worse, it easily breaks down into smaller fragments. Besides being consumed and directly entering the stomachs of marine animals, tiny contaminated plastic particles also enter the food chain when eaten by microorganisms like plankton. They then bioaccumulate and move up the food chain.  According to the Los Angeles Times, ingestion of polystyrene is potentially poisonous for humans and animals.

Bagasse is a renewable and biodegradable alternative for food packaging, with none of the negative effects of polystyrene. It’s also more environmentally friendly from start to finish. The manufacturing of bagasse doesn’t require any of the harmful extraction techniques used for fossil fuel-based plastics. In fact, the production of bagasse recycles what would otherwise be unused plant waste. In addition, bagasse is non-toxic to humans and animals. 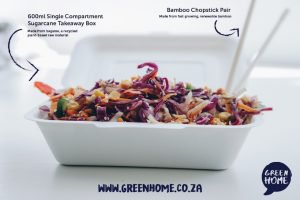 Bagasse packaging is biodegradable, and only takes between one and four months to break
down when composted. Furthermore, if it happens to land in waterways it will also break down quickly and easily, protecting precious marine and wild-life. Once the bagasse food packaging has served its purpose it can be composted in home or industrial compost sites. Creating absolutely no waste!

One potential problem to look out for with bagasse products is that they can contain additives called PFAS. These are a harmful group of chemicals that give grease and waterproof properties to materials. While they are being banned in many countries, they are still widely used. Fortunately, international compostable certification standards limit these chemicals. All GREEN HOME bagasse products are certified compostable according to EN 13432 (the European Union compostable standard) and don’t contain PFAS, so you can rest assured they’ll break down into healthy soil.

In addition to the environmental advantages of bagasse, the material is also functional. Bagasse products can tolerate both hot and cold temperatures, making it particularly suitable for packaging hot and cold foods. The material is microwaveable and releases no toxic substances during the heating process. It’s also freezer safe. It’s a great solution for any business to go green and all you have to do is switch your packaging. We have bagasse plates, bowls and takeaway containers. To make the switch, shop here.