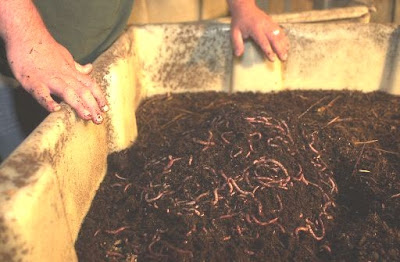 Part one stated that here, in South Africa, we must start recycling our organic waste at source just as we recycle (or should) our inorganic waste. Now, what is organic waste? Quite simply it is anything that was once alive but is now dead and that can be decomposed into compost! This includes all fruit and vegetable matter, plate scrapings after a meal, straw, grass cuttings, sawdust, animal manures and the dead animals themselves, newspaper and cardboard, egg-shells, tree bark. How do ordinary individuals, like you and me, make compost from a constant, daily, supply of organic material from kitchen, garden or farmyard? The short answer is: with great difficulty.

Real compost is made from strict recipes that include such details as layering a heap with materials of different carbon or nitrogen percentages, ensuring adequate moisture, turning the heap occasionally and waiting at least six months for the materials to decompose and mature. During this process internal temperatures of the heap can get up to 70ºC – high enough to kill all pathogenic (ie disease-causing) microbes and also all weed seeds. This process is called thermophilic (high temperature). The final result is a black, crumbly, damp, living compost literally teeming with millions upon millions of saphrophitic (ie able to eat and digest dead organic material) microorganisms – and it is these microorganisms that, when added to the soil, provide the necessary nutrients for optimum plant growth.

Some people with large enough gardens throw all their organic waste onto a pile and hope that compost will result – this is slightly better than useless but, in any case, people in flats, large restaurants, farmers etc. do not have this facility. So that was the problem: large amounts of organic waste and no realistic way of getting rid of it at source. Then a lady in America had a brain-wave! There is a little worm that spends it life on the surface of the earth under a thick layer of wet, rotting, organic materials whose excrement is, to all intents and purposes, excellent-quality compost. It was also found that these worms could be kept in captivity. Thus began the industry known as VERMICOMPOSTING (vermes is the Latin for worm). It should be noted here that these worms, although they are of the earthworm FAMILY, DO NOT live in the soil.

This special worm has the Latin name Eisinia fetida (I-see-nee-a fet-eeda) and is the worm most used in South Africa for vermicomposting. Common names are red wrigglers, brandlings, manure worm, tiger worm. The worms do not actually eat the organic waste but rather graze on the millions upon millions of microorganisms actually devouring the waste. These saprophytic decomposers are mainly bacteria, fungi, protozoa and moulds – exactly the same microorganisms that are found in matured thermophilic compost!

Some Worm Facts:
Eisinia fetida are hermaphrodite (are both male and female at the same time). Two worms have to mate to spread their male sperm to the female oviducts of each other. Capsules are produced (two to three per worm per week) and each capsule can have many young worms – up to 12 have been recorded! From egg to sexual maturity is roughly 78 days when the entire cycle begins again. It has been asked how the worms, with their fecundity, have not covered the earth by this time. The answer to this is three-fold. Their habitat of surface-dwelling under thick wet organic material is very scarce; living on the surface they are prey to every carnivore and bird around and they cease breeding if the food supply runs out.

Part three of this series will provide more facts about this extremely important animal.