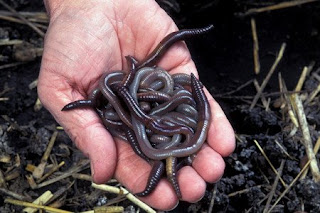 Part two introduced the very important member of the worm family called Eisinia fetida. This little creature can be kept in captivity, fed on organic rubbish and will produce excellent-quality compost during its long life. To avoid any confusion, the different species of worm found in the soil are listed here. The difference is mainly in the habitat of the different species.

Deep-delving worms, or anecic (greek for “up or out of the earth”). Found deep in the soil, make permanent burrows and come to the surface where they drag organic material back down into their burrow for later consumption.

Soil-dwelling worms, or endogeic (greek for “in the earth”). Found to a depth of roughly 1 meter in the soil. Do not make permanent burrows but draw surface organic material into the soil for later consumption,

Surface worms, or epigeic (greek for “upon the earth”). Found on the surface of the earth under a thick layer of wet organic decaying rubbish.

Although this series concentrates mainly on epigeic species, the more worms found in any patch of the soil the more fertile that soil is. In fact, the importance of all types of earthworm was stated by Charles Darwin (who spent the last years of his life studying them) when he said that every morsel of vegetable eaten by animal or human had been, at least once, through the gut of an earthworm! Today, however, with the widespread use of inorganic fertilisers the number of earthworms per hectare has fallen drastically and it is doubtful if this statement is now true. It should be the aim of anybody concerned with the future to do everything possible to encourage the return of the humble earthworm.

Our organic worm Eisinia fetida has very many other uses in the service of mankind. The following list is NOT exhaustive and there are probably other uses still to be found for it.

– Worms are dried, ground-up and used as protein filling for hamburgers, and other minced meat products. In fact, research is ongoing in Australia to find out of worm protein meal can replace fish protein meal – especially as the fishing industry in that country is not very robust. It has been claimed that dried worm meal is almost pure protein!
– The respiratory fluid that corresponds to the blood in an animal is collected and used in the manufacture of some types of antibiotics.
– Contrary to ‘urban legend’ a worm cannot be cut in half and become two worms! However, if the worm is cut below its vital organs (it has five hearts) the worm can grow a new tail section. Laboratory research is ongoing to ascertain just how this is accomplished. It is hoped that the experience gained can help the regeneration of human tissue.
– Worms are a source of collagen which is used in lipstick!
– Worms are used as feed for frogs, fish and chickens. Being almost 100% protein, they are by far the most effective (and cheap) animal feed around.
– Municipalities have been selling sewage sludge for use as an agricultural fertiliser. However, it has been noted that such sludge is almost always contaminated by heavy metals – and these heavy metals can cause great damage to flora and fauna in and on the ground. Many research laboratories have been using worms to work the sewage sludge before use and it has been found that the worms’ digestive tract has removed any and all heavy metals to a lower level than even that specified by the USA in its various Environmental Protection Acts (EPA’s). It is still unclear how exactly the worm accomplishes this.
– An Army hospital in Bangalore, India, under strict protocols, fed the waste from various wards in the hospital to worms. This waste was contaminated with body fluids etc. and was dangerously active with pathogenic microbes. After a period, the compost produced was analysed and it was discovered that ALL (not some, but all) of the pathogenic microbes had been eliminated or at least reduced to non-lethal levels. Again, it is still unclear just how the worms accomplish this small miracle.

Part four of the series will describe how any individual, even in a small flat, can have a wormery.