These powerful images hit home.  Beautiful artworks display tragic consequence of high consumption; in particular our relationship to disposable plastic.  Informed by the environmental problems that plague many parts of Africa, photographer Fabrice Monteiro, costume designer Jah Gal Doulsy and the Ecofund Organization collaborated to present a series of photographs. 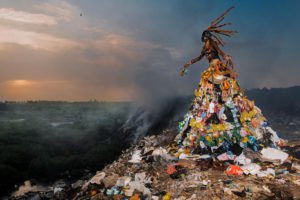 “The Prophecy” project, shot at ten locations in Senegal, features intricately costumed figures interacting with astonishingly-polluted surroundings.  Meticulously built garb is partially made from garbage and debris found on location and reflects the atmosphere and state in which each destination was found.

A photograph shot in Mbeubeuss shows a woman of superhuman size clothed in plastic remains, making her way through a landscape of garbage. Once a green marsh district, Senegal’s largest waste dump still provides space for a marginalized part of the population with its own laws and territorial demands, despite prevailing adverse conditions. 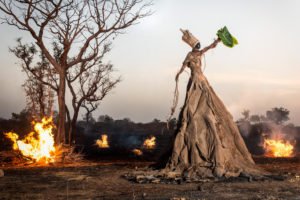 GreenHome promotes alternatives to petroleum-based plastic, in particular disposable plastic used in food packaging.  GreenHome supplies plant-based food packaging to many African countries in an effort to reduce plastic pollution and a move towards the use of renewable resources.