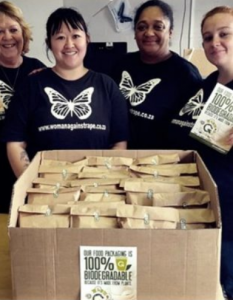 (WAR) and South African Police Services recently held an awareness day in Du Noon to raise awareness regarding each person’s rights to physical, mental and emotional safety. They spoke about what is reasonable and what can be identified as abuse. They presented prevention strategies and most importantly how one seeks help and support in the event of rape.

WAR plays a significant role in the South African community in which so many women and children experience abuse. We loved having the opportunity to support this cause. The GREEN HOME team prepared 200 sandwiches, packed in recyclable, compostable brown sandwich bags made from recycled paper and distributed them on the day.

What does Women Against Rape do?

Women Against Rape (WAR) encourages all South Africans to exercise their rights by teaching them that their bodies and spirits are sacred. No other person has permission to violate these rights in any manner. In the event of violation or abuse, victims have a right to be heard and counselled through empathetic and skilled care. WAR is dedicated to providing knowledge to prevent rape and the necessary steps to work through such a traumatic event.

There is a call centre in Montague Gardens that works to create awareness surrounding this ever-increasing crime, provides practical strategies to avoid these situations and comfort and support to those who survive rape and abuse.  WAR is on standby 24-hours a day and particularly over the festive season when the number of incidents increase.

Women Against Rape also assists various other safe havens, managed by other charities, for example Peas in a Pod, a safe haven for sexually abused children who have been removed permanently from their parents. This organisation provides meals, clothing, outings and counselling. There is Thuthuzela, Wolmer, Tshwane Medico, New Beginnings and other havens.

WAR is constantly involved in speaking out against rape and abuse in local communities such as churches, schools and the South African Business Woman’s Association. In the 15 years that WAR has been in operation, WAR has provided counsel and comfort parcels to Atteridgeville, Laudium, Diepsloot, Olievenhoutbosch, Mooiplaas informal settlement and Pretoria central, Hercules, Johannesburg, Durban, Knysna, Prieska (near Kimberley) and in the Western Cape: CIC in Milnerton (based at Milnerton SAPS), Tableview SAPS trauma centre, Ukukhanya in Somerset West and Bellville SAPS trauma centre.