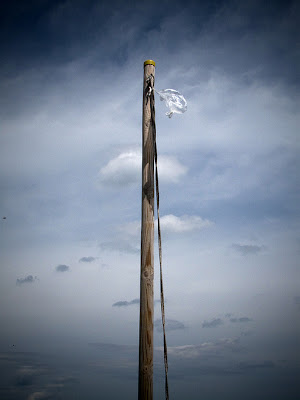 (From the movie ‘The Graduate’ 1967 starring Dustin Hoffman.)
Mr McGuire was right. There was a great future in plastics. Over the last 60 years plastics have become central to our lives.
This is evident by the ubiquitous nature of plastics today. Plastic is everywhere: our oceans, our beaches, our forests, our deserts, our cities, our homes and our bodies. Anywhere you go, you are bound to bump into a piece of plastic.
Unfortunately, this miracle material does not go away. Apart from a small percentage of plastic that is incinerated, every piece of plastic ever made is still with us today. Plastic is forever. It does not biodegrade; it only ever breaks down into smaller pieces of plastic. 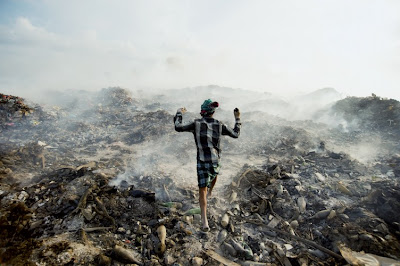 In 2010, 300 million tones of plastic were produced globally. About half of this was used just once and then thrown away. In 2011, we will produce more. Consumption of disposable plastics such as bags, bottles, straws and other packaging has spiralled out of control. We use these items for seconds, hours or days, but their remains last forever. The figures are staggering. Approximately 500 billion plastic bags are used worldwide every year. That’s more than one million bags every minute.

Our oceans have become our ‘landfills’. They are now known to contain the majority of mankind’s waste, and the largest component of oceanic pollution is disposable plastic. Conservative estimates suggest that there are 140 billion kilograms of plastic in the ocean. The well documented Great Pacific Garbage Patch is just one of 5 such ‘gyres’ where global currents meet and spin and plastic waste accumulates in large concentrations These plastics ‘islands’ are really more like plastic ‘soups’, and according to the Algalita Marine Research Foundation, plastic outweighs plankton by at a ratio of 6:1 in the Great Pacific Garbage Patch.
Smaller pieces of plastic ingested by marine birds and animals are known to cause deaths as pieces of plastic accumulate in their gastrointestinal systems, ultimately causing starvation. Toxic chemicals from plasticizers in plastics leach into the bodies of the animals that ingest them, and these chemicals move up the food chain. Combine this with endocrine disrupting chemicals that leach directly into our food and drink from plastic food packaging, and we’ve got a rather toxic brew accumulating in our bodies, along with our environment. 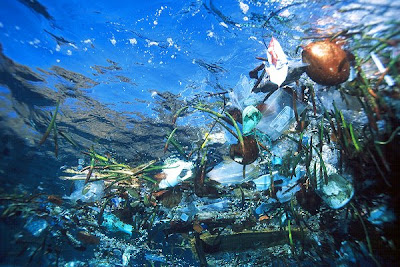 So what is the solution to what is clearly a global plastic pollution crisis? The answer is simple. The execution more challenging. Our excessive consumption of resources must stop. We need to move away from our reliance on oil based plastics. Contrary to popular belief, recycling of plastic is not a sustainable solution. Recycling of plastics does not stem the production of virgin plastic and, in fact, creates a greater demand for virgin material. Plastic bonds are weakened during the recycling process, and virgin plastic needs to be added to create new products. Not only does this reinforce the plastic pollution cycle, but more oil is needed to produce virgin plastic.
Food packaging is one of the largest components of disposable plastics consumption. We need to change our disposable culture and stop using products with a cradle to grave life cycle. However, the radical mind shift required to change our current lifestyles will not happen overnight. The next best option is to use products that follow a cradle to cradle life cycle, such as packaging made from renewable plant based ‘bio-waste’ materials that will biodegrade after use.
European governments have supported the introduction of compostable packaging through specific legislation such as the German Packaging Directive which gives the industry the ability to develop an effective disposal system and is a clear indication of support for biodegradable packaging. IBAW’s ‘Compostable’ certification and labelling system has now been adopted by numerous countries in Europe, including Great Britain, Germany and the Netherlands, further strengthening the ability of the biodegradable industry to successfully implement the underlying closed loop life cycle.

Compostable packaging is not a panacea to the global plastic pollution crisis; but it is a part of the solution. It is a new industry that comes with its own obstacles and challenges, particularly here in South Africa where there is no government support for the introduction of compostable packaging and there is marginal, formalised waste separation. Here in South Africa we cannot afford to wait for government legislation to effect change, instead legislation will follow the change that we make happen.

Individually, we need to rethink how we live and change our disposable lifestyles. The most important thing we can do is avoid unnecessary waste wherever possible. First avoid, then reduce and reuse, and if it must be disposable ensure its biodegradable.