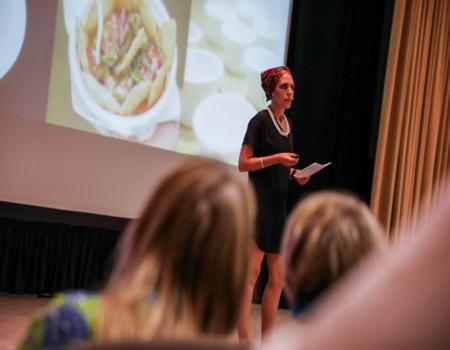 The 2017-18 Volvo Ocean Race is a little over halfway. That’s halfway through 9 months of grueling sailing right around the world. The 7 participating teams stop in 12 cities as they race toward the final finish line in Holland.

In December, one of the race’s early pit stops was in Cape Town. And GREEN HOME’s MD, Catherine Morris was invited to speak at the Volvo Ocean Race Ocean Summit. She leapt at the opportunity to share why she started GREEN HOME and why biodegradable and plant-based packaging solutions are so important.

The Volvo Ocean Race is described as one of the toughest professional sporting events in the world – the ‘Everest of sailing’. A feat of endurance that only happens once every three years. It brings people together who love sailing and racing and who care passionately about oceans.

When Endurance is not a Good Thing

But in the oceans another kind of endurance is causing tremendous damage. Oceans are on the front-line of our plastic crisis. Designed to not biodegrade, the huge quantities of plastic entering our seas endure and persist. Tragically, this plastic kills millions of seabirds and hundreds of thousands of ocean mammals every year.

In response, the current Volvo Ocean Race has organised a series of Ocean Summits. These showcase innovative solutions to the plastic crisis and create a platform for individuals and organisations working to raise awareness.

At the Cape Town summit, Catherine shared the stage with a group of incredible ocean advocates, including Emily Penn, Chris Bertish and Boyan Slat. The summit was held at the V&A Waterfront who made a pledge at the event to eliminate single-use plastic bags and bottles from its operations. The final Ocean Summit takes place in the Hague, Holland at the end of June.

The ocean can push us to our limits, setting an incredible stage for extreme sporting events, like the Volvo Ocean Race. But our behaviour is pushing the limits of oceans too. It’s going to take a great many people coming together to solve this crisis. Join us in being part of the solution and taking a stand for oceans!