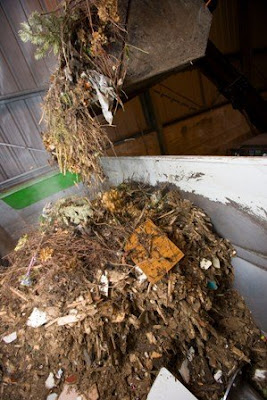 Degrading, or decomposing, material produces all kinds of gasses including, methane and CO2. One of the arguments against biodegradable packaging is that when it ends up in a landfill it produces more methane than plastic. Green Home consulted some waste-management and compost experts to address this question.

Methane traps 21 times more heat in the atmosphere per molecule than carbon dioxide, so there is no doubt that it does contribute significantly to climate change. In order for biodegradable alternatives to plastic to be completely environmentally-friendly they have to be composted and aerated thoroughly during the process to prevent methane production. More methane is produced under anaerobic conditions than under aerobic conditions. Composting will only produce methane if it is anaerobic, that is why aeration is so important. However, the CO2 produced is regarded as carbon neutral because it does not come from a fossil fuel. In fact, composting is eligible for carbon credits according to the Clean Development Mechanism under the Kyoto Protocol.

Composting processes that are aerobic in nature, which means that turning equipment is used to aerate compost during production, prevent the build-up of methane and CO2. This is because oxygen–rich conditions prevent the accumulation of other gasses. During the high incidence period of gas build-up (typically the first 4-5 weeks of the composting process) turning is crucial for the process to succeed. Generally speaking, most compost processes do not produce enough methane to even warrant the tapping of it, in other words, redirecting the gas to use for electricity, cooking, heating etc.

As petroleum becomes less readily available and more and more plastic is replaced with biodegradable packaging, a restructuring of waste-management and the creation of industrial composting sites will become essential. If the composting process is well managed the production of methane will be kept down to a minimum and carbon from the atmosphere will be removed. This is because composted organic material has been produced by current sunlight, whereas plastics are produced from fossil fuels. Also,the carbon trapped in the production of Green Home’s biodegradable products is removed from the atmosphere (and most of it remains bound in the compost produced from them) that can then be used to remove more carbon from the atmosphere by growing plants.