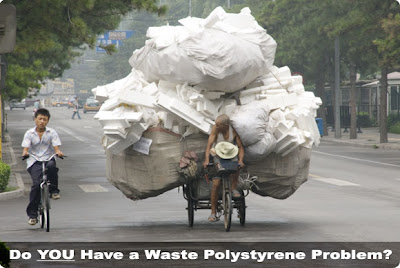 In light of the global movement away from the unsustainable use of non-renewable resources and the growing awareness of the environmental effects of plastics, it is not surprising that a recent newsletter published by the Polystyrene Packaging Council attempts to promote polystyrene as an environmentally responsible plastic. What is alarming is their warning against the use of biodegradable plastics and their claim that polystyrene is more environmentally sustainable than bioplastic!

Oil is a non-renewable resource and a heavy pollutant both in its extraction and use, contributing significantly to global warming. Oil is the building block of all plastics including polystyrene and yet the PPC claims that polystyrene has ‘the lowest carbon footprint.’ The lowest carbon footprint compared to what? Other plastics? The truth is that polystyrene is made from a non-renewable, heavily polluting, socially irresponsible resource that is becoming increasingly dangerous to source as the recent oil spill off the Gulf of Mexico has so clearly illustrated.

Polystyrene does not biodegrade, and while it can be recycled ‘up to 20 times’ according to the PPC, this is very rarely the case. Most polystyrene ends up in landfill and the small percentage that is recycled is not made back into polystyrene but into other non-recyclable items such as picture frames. The truth is that polystyrene recycling (as with plastics in general) is not a closed loop process. Unlike glass and metal recycling the item is not made back into its original form, thus requiring the use of more non-renewable natural resources to produce more of the original material.

The PPC’s newsletter in its “Alert on Biodegradable Plastics” warns that “..materials in the compost heap will exude methane gases that have a negative impact on the environment.” They seem to be warning against composting. Are they suggesting that it would be better for all green waste including biodegradable packaging to be sent to landfill to exude the greenhouse gas methane instead? The truth is that biodegradable matter does not exude methane when in an aerated compost heap.

It is misleading and irresponsible of the PPC to portray composting as a negative activity. Composting is an integral part of any waste minimisation strategy, as it reduces the vast amounts of methane producing green waste that goes to landfill whilst making natural, clean and useful compost. The truth is that the polystyrene industry, like the rest of the plastics industry is under threat and has passed its expiry date and will say anything to protect its bottom line.

The most environmentally sustainable solution would be to avoid the production of waste altogether, whether biodegradable or not. Unfortunately this is not always possible.  If something must be disposed of then we need to ensure that it is made from natural, renewable and socially responsible resources.

Composting Solution Providers in your area.