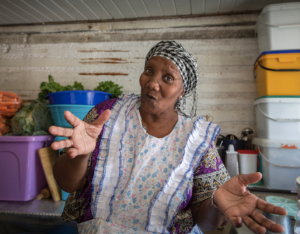 Mickey Winifred Linda is the incredibly inspiring woman behind the Yiza Ekhaya Soup Kitchen and Sewing Project, a community project based in Khayelitsha. Her project feeds 150 children in the neighbourhood and around 20 elderly people who are on medication which requires them to eat so they can take it.

Mickey is a 59 year old, known in the community as Nompilo (loose translation caregiver),  with a heart bigger than Khayelitsha.
She came to Cape Town as a young girl, and found work in the city as a domestic worker. For 15 years while she cleaned, and enjoyed the security of a meager salary, she had an unsettling feeling that she didn’t belong in other peoples’ homes. She belonged in her community. She had a vision that she needed to help other people. However, with very little money saved up, and very little support, she had no idea how she was going to do this.
In her early 40’s she made the decision to find work in Khayelitsha at a children’s creche. Here she learned about nutrition and first aid and earned her name Nompilo from the community. She loved this work and took to caring for both young and old.
One night a man came crawling to her on his hands and knees with a bad stomachache. She realised his ailment was due to TB tablets on an empty stomach and treated him with home remedies and food. He lay on her couch while he recovered. When he awoke he claimed she’d saved his life. From this day, Nompilo took her work even more seriously and went the next step to opening up her own soup kitchen, using her grant money to get it started.

The Yiza Ekhaya Soup Kitchen and Sewing Project is a combination of:
Mickey starts her day at 4:30am or 5:00am to receive the first kids of the day, who she looks after and feeds. By 10am she will have fed 140 children in the community breakfast hall.
After that, it’s time to start preparing lunch for approximately 80 children and 20 elderly people. Mickey explains that the elderly are mostly on medication, which is why she must feed them. They have medication but no food with which to to take it.
The Yiza Ekhaya community project runs from an extension of her RDP home. Mickey does not have access to many resources and relies on a few dedicated supporters to ensure her project runs. When her funding is regular then Mickey is able to do her work. When the funding stops, then she does what she can from her pension, until this runs out again.
Mickey appreciates help in any form. If you have time, money or surplus seeds or compost for the community garden you can make a donation. To find out how you can assist contact Mickey on  072 010 4337, or there are a number of ways to donate via their website.
Share this on:
Category: Yiza Ekhaya Soup Kitchen
Tags: community garden, community project, feeding hungry children, soup kitchen
Leave a Reply Cancel reply
X Close
× Order with WhatsApp