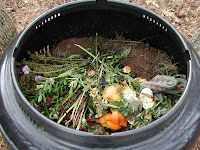 Do you resent throwing out all your kitchen and garden organic rubbish? Do you think you should be doing more to help the environment? Would you like a constant supply of excellent-quality liquid and solid compost – at no cost to yourself? If the answer is yes to even one of these questions, then read on.

Most of us have seen or heard of the movie produced by Al Gore, ‘An Inconvenient Truth. This movie pointed out that we are producing large amounts of lethal gases like carbon dioxide and methane which is causing the‘greenhouse effect’ and this, in turn, is warming the earth with observable catastrophic effects. But it is not only the Eskoms’s and Sasols’s of this world that are at fault – we are all just as guilty! For decades we have bundled all our waste, both organic (garden and food waste) and inorganic (packaging etc.) into plastic bags for the ‘bucket men’ to remove. Hundreds and thousands of these black bags are thrown into holes in the ground and left to rot in anaerobic (without oxygen) conditions. The rotten elements dissolve into liquid and soak into the ground water system or vaporise into carbon dioxide and methane gases that escape into the atmosphere. What this means is that the crust of pizza you threw out of your kitchen some years ago has quite possibly contributed a few molecules of methane gas to the gases threatening life on earth.

Governments around the world have woken up to this problem and many European countries have either banned or are in the process of banning ANY rubbish being thrown into holes in the ground. Recycling of inorganic materials has reduced the amount of rubbish being thrown out but this still leaves huge amounts of organic rubbish to be disposed of. Disposal is a headache for everybody and, where local governments actually remove the rubbish, the originator of the rubbish pays a heavy price for this. In fact, rubbish removal in Europe is a very expensive business indeed.

Is there perhaps a way of reducing the amount of organic waste being produced and finding its way into the waste-stream? Not really, people and animals have to eat and excrete. But means have to be found to reduce the amount of organic waste coming INTO the waste-stream. The only possible method (not counting methods such as incineration) is to convert this organic waste into compost. By so doing we return to the earth that which was removed. The system now in use in Europe is that the polluter must get rid of his or her own waste AT SOURCE.

Read more next month as to how we, here in South Africa (as polluters!), can convert our organic waste into excellent-quality compost.