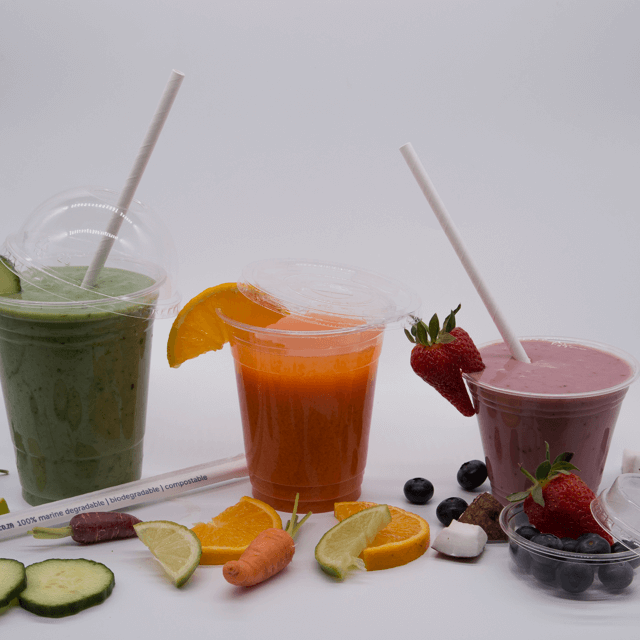 1. Why use GREEN HOME Products?

There are two primary environmental benefits to using GREEN HOME products. They’re made from
renewable resources and they can be composted after use – so they only last as long as they’re needed.
We pride ourselves on the fact that we are the only food packaging company in SA that doesn’t sell plastic food packaging and that we only source the most sustainable packaging we can find. We’re green on the inside and the outside and are in this for the good.

2. What Does ‘Biodegradable’ Actually Mean?

Biodegradable materials can be broken down by biological means (bacteria, fungi & insects) into the basic building blocks of life – essential things like water, oxygen, carbon and nitrogen.

These building blocks are then used again, keeping the cycle of life in motion (hooray!). Biodegradation is nature’s recycling strategy and an essential mechanism for regenerating life on Earth.

3. What’s the Difference Between Biodegradable and Compostable?

Biodegradation happens when microbes and insects naturally break materials down, in their own sweet time. Composting, on the other hand, is a controlled process designed to maximize natural biodegradation. Composters create ideal conditions for breaking organic matter down into nutrient rich soil quickly.

To be certified compostable, products need to pass certain tests. These ensure they can break down in no more than 180 days, and the compost they make is healthy for plants and free of toxic residues.

4. Do Your Products Contain any Fossil Fuels?

No. We only stock products made entirely from renewable resources.

5. How Long do GREEN HOME Products Take to Break Down?

6. What Happens When Compostable Packaging Ends up in a Landfill?

Landfills are designed to bury waste, not break it down. The waste gets compacted, with little oxygen, resulting in the release of methane, a potent greenhouse gas.

Compostable packaging and all other green waste (fruit & veg peels, waste food, garden clippings) will break down very slowly in these conditions.

Landfills have negative environmental impacts and are not a great solution. In SA, about 40% of landfill waste is green waste. Instead of sending it to rot in landfill, we can compost it – turning it into healthy soil. Our green ‘waste’ can become a valuable resource!

Sending plastic to landfill is also bad. Studies show that buried plastic, and plastic fragments, can release harmful chemicals into groundwater and soil. Plastic also suffocates organic materials, making it much harder for them to break down. That’s why we believe biodegradable materials are the best choice for a healthy, waste-free system.

GREEN HOME is a founder member of ORASA (The Organics Recycling Association of SA). We are working with other ORASA members to grow SA’s composting sector. One important way of increasing composting is using a 3-bin system where organic, recyclable and landfill waste is separated at source.

7. What’s the Difference Between Commercial and Home Composting?

Commercial (also called Industrial and Large-Scale) composting is done in large piles/windrows or large in-vessel machines. The large size of the piles increases microbial activity, which raises temperatures and speeds up composting times. (This is why commercial composting is ideal for composting PLA, which needs higher temperatures to break down).

Both commercial and home composting can create excellent compost.

8. Can Your Products be Recycled?

The short answer is, yes, all our products can be recycled. But it’s a little more complicated than that. Firstly, we sell packaging for take-away food. Containers covered in food residue aren’t always suitable for recycling (but are great for composting).

So, if clean and dry, our sugarcane and paper products can be recycled with paper recycling. Our PLA products are also recyclable – but sadly, there aren’t any PLA recyclers in SA yet. We think it’s important to point this out – recyclable doesn’t always mean recycled!

And of course, all our products can be composted, which is how Nature recycles materials. It produces zero waste, uses absolutely everything, and regenerates life. Woop woop!

9. If Compostable Products don’t get Composted, isn’t it Better to use Recyclable Plastics?

Well, we don’t think so, even if plastic recycling does briefly extend the useful life of some plastics. The problem is that plastic packaging recycled into shoes or clothes or whatever remains non-biodegradable and will still end up as waste in a short time.

Plastic also tends to be downcycled (turned into lower quality plastic items), and more virgin fossil fuels are used during the recycling/downcycling process. So plastic recycling increases, rather than decreases the plastic on our planet. It also encourages people to buy more plastic, because they believe it will be reused. In reality, only a small portion of plastic is recycled, and very, very little is recycled more than once.

In contrast, biodegradable materials can remain part of cyclical systems which regenerate life forever. Even if they end up in a landfill, they’ll eventually break down into their natural component parts. Also, many of the benefits of biodegradable products happen before the products are used. Growing plants, for example, is better for the planet than the oil drilling, fracking and coal mining needed to make plastic.

10. What are GREEN HOME Compostable Bioplastic Products Made From?

All our bioplastic products are certified compostable and made entirely from renewable materials, predominantly plant starches.

Our clear Cold Cups & Lids, Biodegradable Bottles, Deli Bowls, Sandwich Wedges and Bioplastic Bags are made from PLA (polylactic acid), which is made from corn starch.

We also stock clear Bioplastic Bags made from wood cellulose.

Our bioplastic Cutlery and Hot Cup Lids are made from CPLA, which is PLA combined with chalk and other biodegradable additives. This enables it able to withstand higher temperatures, making it suitable for hot food and drinks.

It is important to be aware that not all bioplastic products on the market are compostable and free of fossil fuels. We believe 100% renewable plant-based and compostable bioplastics are the only option for a sustainable, circular economy and only ever stock these products.

11. What’s the Difference Between PLA and Wood Cellulose Bioplastic Bags?

12. PLA Bioplastic Still Takes Very Long to Breakdown if not Composted Correctly. What’s the Point? Is it any Better Than Plastic?

People sometimes question PLA because it needs industrial composting conditions to break down and these aren’t widely available. It’s important to realise that this problem is part of a much bigger issue.

We have a waste crisis. Huge quantities of non-biodegradable plastic enter our world every second, most of it soon becoming waste. We also send a lot of our green waste (food, agricultural and compostable waste) to landfill, where it can’t break down properly.

Unlike plastic, PLA is green waste. While plastic is designed to withstand the effects of microbes (making it non-biodegradable), PLA is designed with nature in mind and can still break down. But what’s the point of being compostable if there isn’t enough suitable composting? Well, we humans have just begun waking up to how important composting is – and we’re not currently equipped to deal with ALL kinds green waste, including PLA. Most banana peels, carrot tops and everything else are not getting composted either. A whopping 40% of what we send to landfill is green waste! This is crazy. We’re sending biodegradable waste to a place where it can’t biodegrade. Eish.

And, while lots of people can, and do, compost at home (which is not the right solution for PLA), home composting can never solve our waste crisis. Our enormous human population needs large-scale waste management solutions – including large-scale composting. This will reduce the high environmental impacts of landfill, lower greenhouse gas emissions, reduce waste, and help recondition soils. Also, PLA isn’t the only green waste that needs higher temperatures to break down. Thick bones, woody plants and many other materials also break down much better in industrial composting conditions.

So, PLA is a step towards a future world. A world we’re still building: where renewable & compostable materials are the norm, and zero green waste goes to landfill. We hope you’ll join us in making it happen! In the meantime, our PLA is still more sustainable than plastic in several ways.

It’s made from renewable plants, not fossil fuels and is less environmentally damaging to produce (no oil drilling or fracking). It’s also certified compostable and has demonstrated that it won’t leave any toxic residues in soils. (This also makes it much healthier for the people using it!)
In contrast, plastic cannot break down in any composting conditions. Estimates for how long it lasts range from 450 years to forever. And studies show that harmful additives to plastic polymers often leach out into soil and water.

Producing PLA has also been shown to have a carbon footprint about 70% lower than that of plastic. And even if PLA does end up in a landfill, these benefits will remain and unlike plastic, it will eventually break down, even if it takes a very long time.

We always source the most sustainable plant-based compostable food packaging we can find.

When it comes to straws – paper is the best option by far. Our straws are certified compostable, recyclable, and are ocean friendly. Plus, they’re made from FSC certified paper from sustainably managed forests.

While PLA straws are better than plastic, they won’t break down well in the ocean and cannot currently be recycled in SA.

14. If we’re Using Paper Instead of Plastic, What About all the Trees we’re Cutting Down?

We source our paper from sustainably managed forests. These are certified by the Forest Stewardship Council (FSC) and the Sustainable Forestry Initiative (SFI), who work to ensure that forests aren’t overexploited and biodiversity and wild habitats are protected for the future.

We also use sugarcane paper where possible (like our serviettes). And we’re excited about new tree-free sources of paper becoming available in future. These could include fast-growing Hemp and various agricultural waste fibres.

Our products are easy to custom brand with stickers, sleeves and stamps. And most of our paper products can be custom branded during manufacture (although this usually requires large runs). Chat to a member of our sales team for more info and tips on environmentally friendly printing inks.

The process for opening an account with us will depend on the specific type of business you run. A member of our sales team can advise you on how this will work for your business.