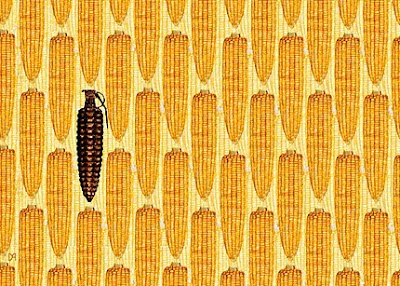 Letter from Mariam and Zakiyya of the African Centre for Biosafety:

We write to share with you the grave and shocking news that the GMO decision making body has given the green light for the importation of Dow Chemical’s highly controversial 2,4-D tolerant GM maize (variety DAS 40278-9) into South Africa, where it will be used as food.

Unlike in the US, South Africans would be consuming this maize, putting the health of the entire South African population at risk and placing further burden on an already burdened healthcare system.

2,4-D was one of two active ingredients in the infamous chemical weapon, ‘Agent Orange’, used to devastating effect during the Vietnam war.
Exposure to 2,4-D has been linked to non-Hodgkin’s lymphoma, a cancer of the white blood cells. We certainly don’t want that in our morning cereal!
Epidemiologists from the National Cancer Institute in the USA regard this link as the strongest association yet found between a pesticide and a disease.
Dozens of human and animal studies have shown 2,4-D to cause birth defects, neurological damage, and interference with reproductive function.
The use of 2,4-D in Sweden, Norway and Denmark is banned because of these well publicised links.

We are angry and we are afraid for the future of South Africa. We need to act urgently for the banning of Agent Orange Maize in South Africa. We have created a Petition on Avaaz. Please sign it , share it on your personal social networks and email contacts. Spread the word in any way you can. We simply can’t afford to let Agent Orange GM Maize into South Africa.
Link to Petition
http://www.avaaz.org/en/petition/Ban_Agent_Orange_GM_maize_in_South_Africa/?cYuMaab